The first K-05 model was introduced in 2011, evolved into the K-05X in 2015, and K-05Xs in 2018. It has become the best-selling model at the heart of the ESOTERIC K Series. The K-05XD inherits the philosophy of the historic K-05 series but is totally
redesigned as a Super Audio CD player; completely different from the previous 05 models by way of revamping it with an all-new design platform. 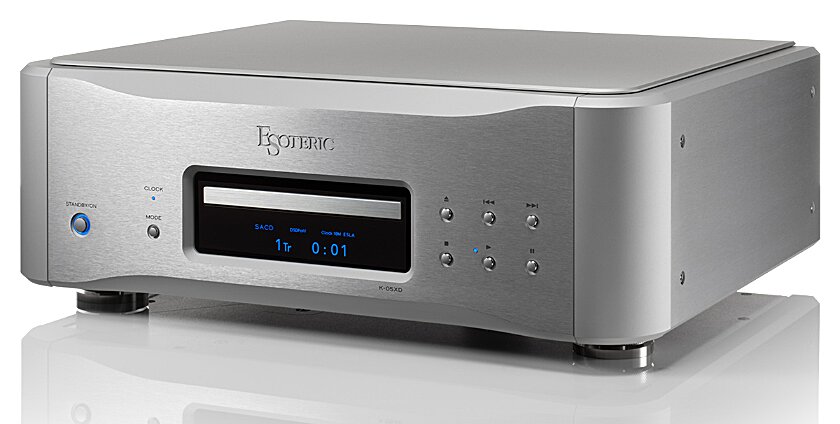 A new VRD-ATLAS transport mechanism “ATLAS 05” is designed exclusively for this model, and the DAC section employs a discrete circuit with the “Master Sound Discrete DAC” to further refine the music reproduction capability.

The VRDS-NEO Super Audio CD transport mechanism, which has been adopted by some of the world’s most prominent brands, and its superior performance, which inherits the technical essence of the flagship models of the day, have has been highly acclaimed and have won numerous audio awards worldwide.

Incorporating the fruits of our labor resulting from the development of the Grandioso G1X master clock generator, a unique discrete clock circuit for built-in players, the “Master Sound Discrete Clock for Digital Player” is employed.
An enlarged double-layer chassis accommodates the upgraded ATLAS mechanism, each larger circuit block, and the power supply section, while it’s the elegant appearance of the K-05XD, – which is even closer now to the upper models, – subtly asserts the richness of its content, worthy of being called a major innovation.

A wide variety of tones that expressively portray the details of music has been achieved, while acquiring the flexibility to adapt to a truly diverse range of genres from silky smooth arias to edgy rock.
The lineage of the legendary models fascinating music lovers, and blissful sound brought by an encounter with new technology, the K-05XD invites you to enjoy it to the fullest. 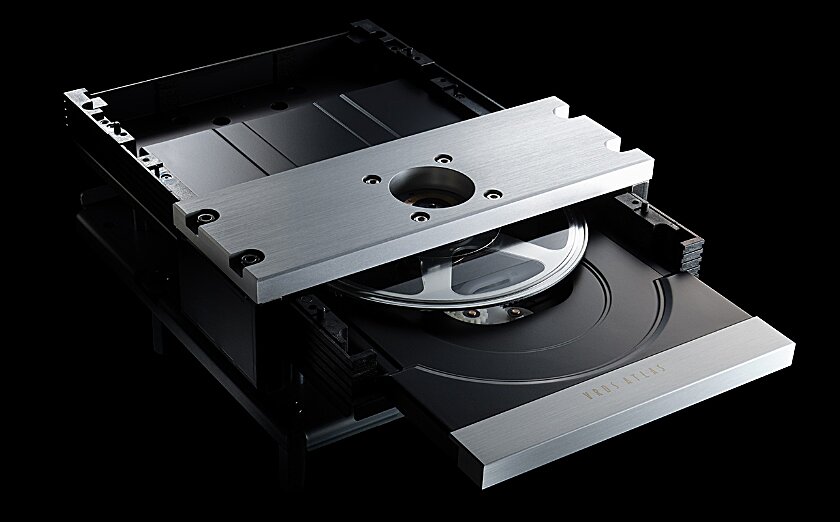 VRDS (Vibration-Free Rigid Disc-Clamping System) is the core technology of the CD/Super Audio CD transport mechanism that Esoteric has been focusing on since the establishment of the brand. The disc is securely clamped to a turntable of the same diameter for rotation, thoroughly eliminating unwanted vibrations from the disc itself and the mechanism. Servo current is minimized by correcting disc warpage with the turntable and greatly improving the relative optical axis accuracy between the optical pickup and the disc pit surface. With these features, disc read errors are significantly reduced and achieves superior sound quality.

The VRDS mechanism continues to evolve. The biggest highlight in its illustrious history is the new VRDS-ATLAS platform, which boasts the highest level of perfection and sound quality. The K-05XD edition qualifies utilizes the “VRDS-ATLAS Reference”, a flagship mechanism quality employed in Grandioso models, and is equipped with the newly designed VRDS-ATLAS “ATLAS 05”, which is exclusive to K-05XD.

The core of the ATLAS 05 transport mechanism is a hybrid turntable made of high-precision aluminum and polycarbonate materials. This beautiful design, inspired by a master tape reel, and its superior vibration control capability, embody the identity of the 05 Series Super Audio CD Players, which have a history of dating back more than 15 years, to the birth of the P-05.
Polycarbonate, the same material as the disc, contributes to natural sound quality with little coloration, and the hybridization with spoke-shaped aluminum effectively disperses vibration modes associated with high-speed rotation, successfully minimizing rotation noise and rotation inertia, while the bridge section supporting the turntable is larger and wider than that of the VRDS-NEO, and is made of a machined aluminum block 10 mm thick with a beautiful hairline finish, while its high rigidity and heavy weight construction effectively eliminate vibrations that affect sound quality.

With the complete renewal of the 05 series, the chassis has undergone the most significant evolution in terms of appearance. To accommodate a larger ATLAS mechanism than the VRDS NEO and to further enhance the scale of the circuitry, a dual layer large chassis is employed instead of the previous slim, single-layer chassis, while maintaining the same depth. The VRDS-ATLAS transport mechanism is center-placed and rigidly fixed to a 5mm-thick steel bottom chassis via a 2mm-thick steel base plate, while the entire chassis is then supported at three points by a unique pin-point foot (Japan Patent No. 4075477 and 3778108).

Like upper class models, the bottom chassis has been laser cut with slits to effectively disperse and suppress vibrations from the rotating mechanism. Inside the dual layer chassis, audio circuit boards are mainly placed on the upper layer and power supply circuits and transformers on the lower layer to prevent magnetic flux leakage and vibration, and to minimize power supply wiring to refine the pure tone quality.

The semi-floating structure of the top panel, which is not tightened with screws, brings out extensive and open sound.

By assembling circuits with discrete components that have been carefully examined, we aim to perfectly reproduce the “vibrancy” and “energy” of music, which cannot be achieved with integrated chips. The pride of Esoteric’s top engineering team has been put to the test in the Master Sound Discrete DAC, a discrete D/A converter designed completely in-house. 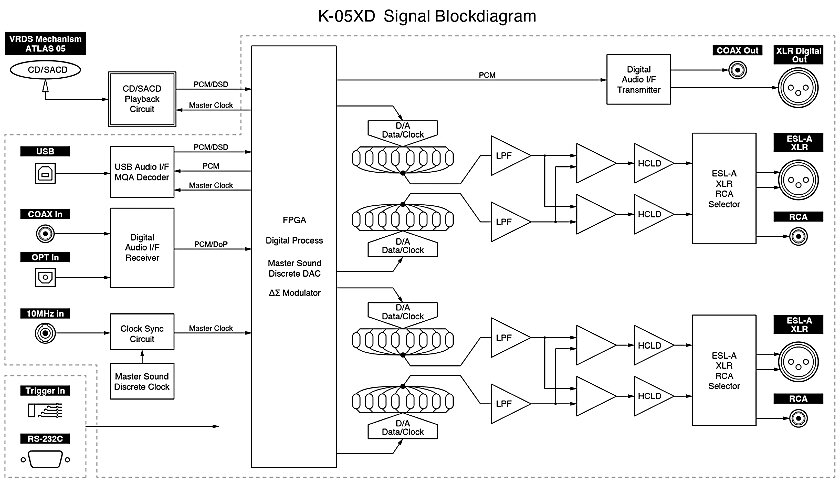 The Master Sound Discrete DAC was first installed in the Grandioso D1X and was highly acclaimed for its live sound. On the K-05XD, it condenses the essence of the Grandioso K1X version, but with a simplified circuit configuration that takes the 05 series to a new horizon. The DAC consists of 16 elements per channel, and each element consists of components such as clock drivers, logic circuits, capacitors, and resistors, while each key component is independent of each other, and the luxurious configuration is a direct extension of the philosophy of the high-end models, so that all the energy of the music is output in its purest form. 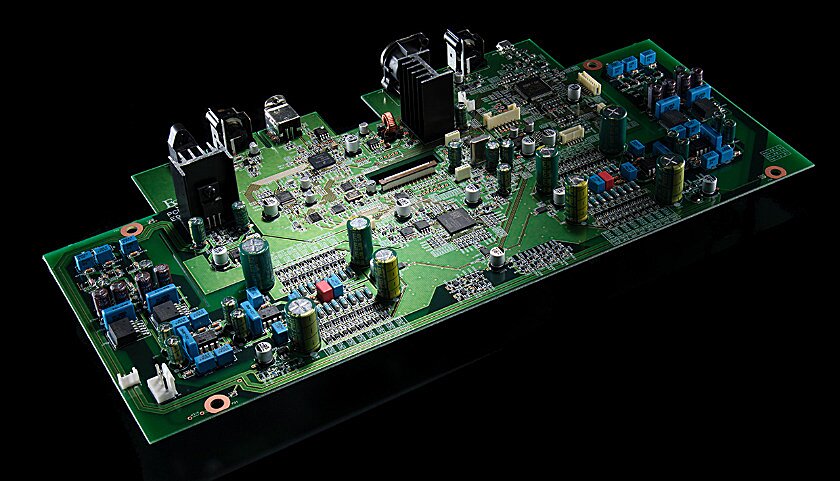 In discrete DACs, where component tolerances directly affect calculation accuracy, a high level of expertise and quality control is required in the manufacturing of electronic boards. Esoteric’s own factory boasts world-class board mounting technology, including soldering in an oxygen-free furnace in a clean room with medical quality. The high quality of Master Sound Discrete DACs is supported by technology cultivated in the manufacturing experience of electronic circuit boards for audio, medical, aerospace, and defense applications.

The Esoteric-HCLD (High Current Line Driver) output buffer amplifier employs a device that boasts an astonishingly high-speed slew rate of 2,000V/μs, which represents the response speed. The most important current transmission capability and speed for analog output circuits are pursued to the limit, reproducing the reality of music with breathtaking dynamic range.

In addition to line connections (XLR, RCA), ES-LINK Analog, Esoteric’s original current transmission method, is employed for connection to an amplifier. By taking advantage of the powerful current supply capability of the HCLD buffer circuit, the signal is less affected by the impedance of the signal path and can be transmitted powerfully, maximizing the potential of the compatible equipment.

Esoteric’s unique current transmission system “ES-Link Analog” is the ideal method for preamp to amplifier transmission where the signal level is extremely low. Compared to the conventional voltage transmission, it transmits approximately 100 times more current, making it less susceptible to noise and sending the full energy of the music to the amplifier.
Also, it is not affected by the impedance of the interconnects running between the preamp and amplifier, so it maintains a perfect integrity between the output signal of the preamp and the input signal to the amplifier.

In conventional voltage transmission, the output impedance of the source device is low, and the input impedance of the target device is high. In other words, the current required for signal transmission tends to be kept low.
Also, due to the resistance component (impedance) of the transmission path (interconnect cable), the voltage of the transmitted signal is attenuated by the level calculated by Ohm’s law (voltage = current × resistance) when delivered to the target device. Therefore, a longer the cable causes increased resistance which has significant affects on that signal.

In contrast, in current transmission, the output impedance of the source device is high and the input impedance of the input device is low, resulting in a “High out, Low in” circuit, and the current level is maintained higher during signal transmission than in voltage transmission, allowing a powerful audio signal delivery.
Also, in current transmission, the current level output from the source device always matches the one on the target device. Imagine using a hose to send water from a faucet to a bucket. As long as there are no holes in the hose, the same amount of water from the faucet will always flow to the bucket, regardless of the length of the hose.
Similarly, if the cable that serves as the transmission path is not divided into multiple paths, all current from the source device will be delivered to the target device, and the current values flowing will always be the same, even if the transmission path is longer.

This advantage of accurate transmission of even the smallest signals is evident from the fact that current transmission is widely used in measuring instruments that measure precise signals.

With the all-new design platform, the power supply section is enhanced to more than twice the circuit scale of the previous model, adding even more punch and depth to the tone. A total of two high-capacity toroidal transformers are installed to provide independent digital and analog power supplies. In addition, a separate EI core power transformer dedicated to the control section provides lower noise and purer reproduction capability.

The power supply regulator is a discrete configuration that does not use integrated circuits in key parts, and employs a “Low-feedback DC regulator” that minimizes the amount of feedback to achieve a powerful and open sound. In addition, a separate EI core power transformer dedicated to the control section provides lower noise and purer reproduction capability.

Equipped with various digital input terminals including USB for DSD 22.5MHz and asynchronous transmission, the K-05XD behaves as a D/A converter unit, supporting MQA decoding from both MQA-CDs and streaming via USB. DSD converting from PCM digital audio signal is also supported.

It is no exaggeration to say that the clock circuit is the biggest key to high sound quality in digital playback. Esoteric focused on crystal oscillator circuits, which had been previously packaged as general-purpose modules in ICs, and completed a unique manufactured clock module, the “Master Sound Discrete Clock” for the Grandioso G1X, our flagship master clock generator.
The G1X’s unique discrete circuitry has earned high acclaim for its superior musical expressiveness and has caused a stir in the world of clocks, which have traditionally been described only in terms of accuracy. 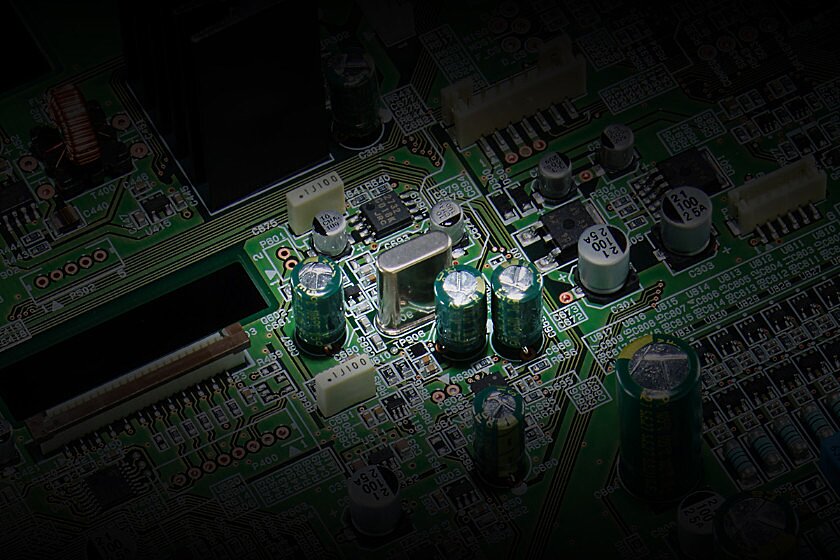 The “Master Sound Discrete Clock for Digital Player” first employed here in the K-05XD, applies this discrete circuit design concept to the internal clock of a digital player, exclusively. The unique circuit design using carefully selected discrete components, such as a large crystal oscillator, achieves high sound quality that reflects Esoteric’s philosophy in every detail, which cannot be achieved with a general-purpose clock IC. The K-05XD also works with an external master clock generator to upgrade the sound quality by synchronizing the internal circuits to an even higher precision 10MHz clock. 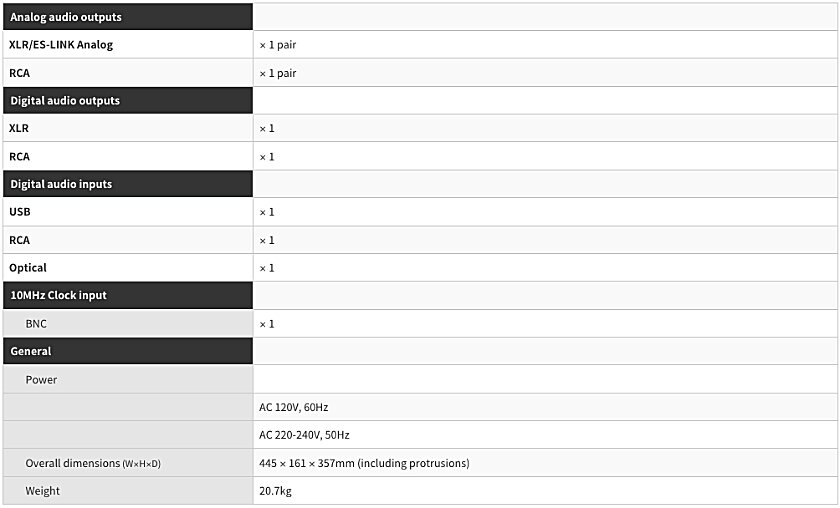