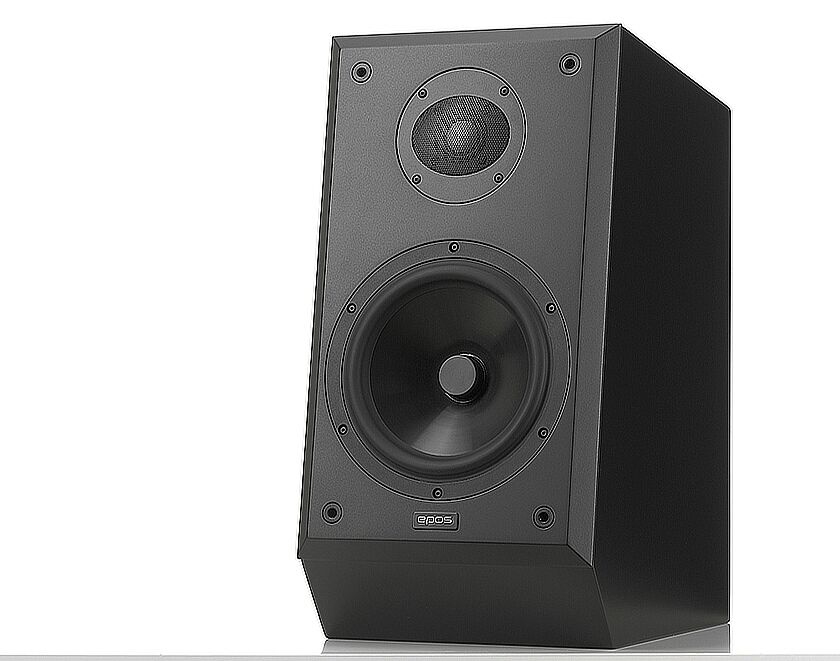 Restarting EPOS could only mean re-creating the most famous model, the ES-14. This was a 2-way speaker in a fairly big cabinet and classic looking cabinet, to be used on a dedicated stand. The design should be classic, not lifestyle, only doing things that help with the sound and as straight forward as possible.

Analyzing the old construction was interesting. It used a 7“ woofer with Polypropylene cone and an underhang coil with a huge magnet, but multiple layers of VC winding to make the whole coil heavy in order to get a sort of roll-off in the response curve of the woofer. The size of the woofer was not following any standard – too big for a 6.5“, but too small for an 8“. But it was a clever choice, because you could get more drive at lower frequencies more like an 8“ and a midband character closer to the 6.5“.

The cabinet itself is using more or less the same volume of the original ES-14. That’s not a big surprise, as the cabinet volume is the result of the driver configuration and the defined bandwidth of the speaker. However, the shape of the cabinet is different. The front baffle is tilted to the back in order to time align the woofer and the tweeter plus it can help with the standing wave mode between front and back. As the design is a reflex system, a port is of course needed. It’s located on the back of the cabinet and the whole shape of the port has been chosen to minimize air flow noise. In order to compensate for the open tube resonance of the port, some openings were added in the middle of the port. To avoid loss of low bottom end, those openings are covered with soft material, tuned to only kill the unwanted resonances of the port.

The cabinet uses a double layer MDF construction, glued together with the latest generation of damping glue. This latest generation is more consistent compared to older solutions and allows easier production. Additional bracing has been used to control the panel vibration modes and reduce the unwanted radiation of the whole cabinet. Only a little damping material is needed internally. 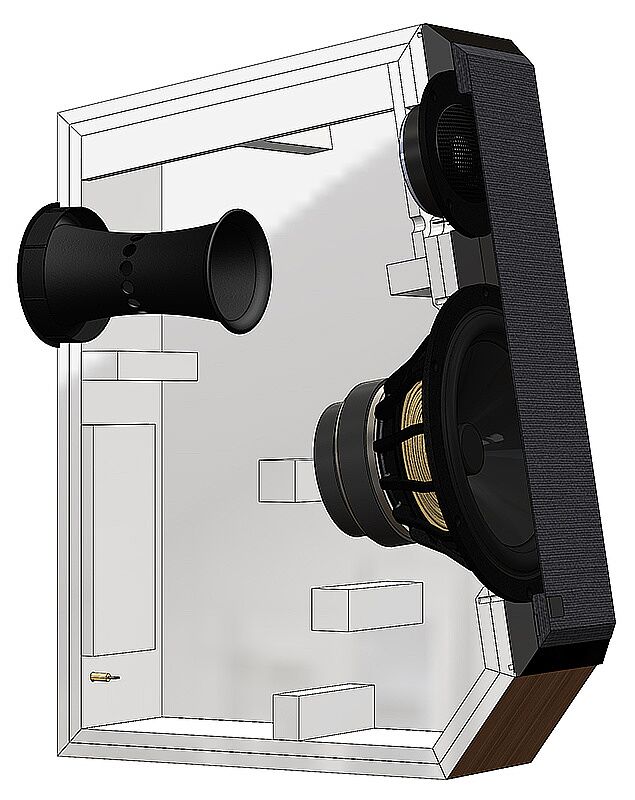 The front plate is an extra part to be glued and screwed on the main cabinet. It has a 45° chamfer around it to control diffraction effect in the 2000-3000Hz region. The first prototypes used square cabinets and it was impossible to get a good frequency response on axis and out of axis. Rounding the corners was not really helping, only the chamfer made the diffraction error a lot smaller and helped balancing the upper midband. An old fashion way, but a useful solution. The speaker comes with front grille, but it is not recommended to use it when listening to music. It’s more a protector when not using the speakers. The tweeter itself is protected anyway and the PP cone is not easy to damage.

The alignment of the box is a flat 4th oder alignment with a tuning frequency of 38Hz. It matches with the bottom end gain of many listening rooms and allows fast and precise bottom end when used in the right position in the room. The binding posts are 4mm banana sockets, mounted on a metal plate. Those banana sockets use very little metal internally to guarantee the best sound – that’s one of the nice ideas of the original design and better than using very expensive “High-End“ binding posts with litte metal but a high price tag. Those single wiring sockets feed the amplifier signal to a crossover that sits on the rear panel of the speaker.

The original crossover needed very little components and was extremely simple, the new ES-14N follows the experience of the last 20 years that electrical parts are easier to control than mechanical filtering in driver units. In earlier days, before Klippel, the multilayer coil of the original woofer was designed in a way that it rolled off the woofer with the weight and the high inductance of the windings. 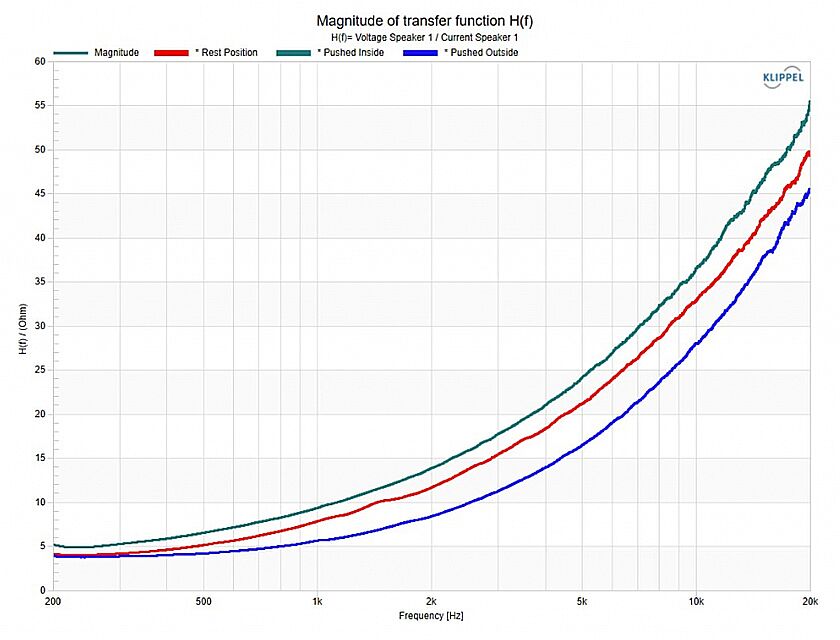 The original crossover needed very little components and was extremely simple, the new ES-14N follows the experience of the last 20 years that electrical parts are easier to control than mechanical filtering in driver units. In earlier days, before Klippel, the multilayer coil of the original woofer was designed in a way that it rolled off the woofer with the weight and the high inductance of the windings. In the new woofer, the coil is only 2-layer and with compensation rings, the impedance over excursion is very constant and that avoids modulation of the crossover. The coil is executed as air coil and adds no core distortion. A non compensated magnet, would indeed react with a crossover and that means the old idea made sense. However, the way to roll off the woofer with high inductance, added another set of problems – but we learned about it only in the last 20 years. 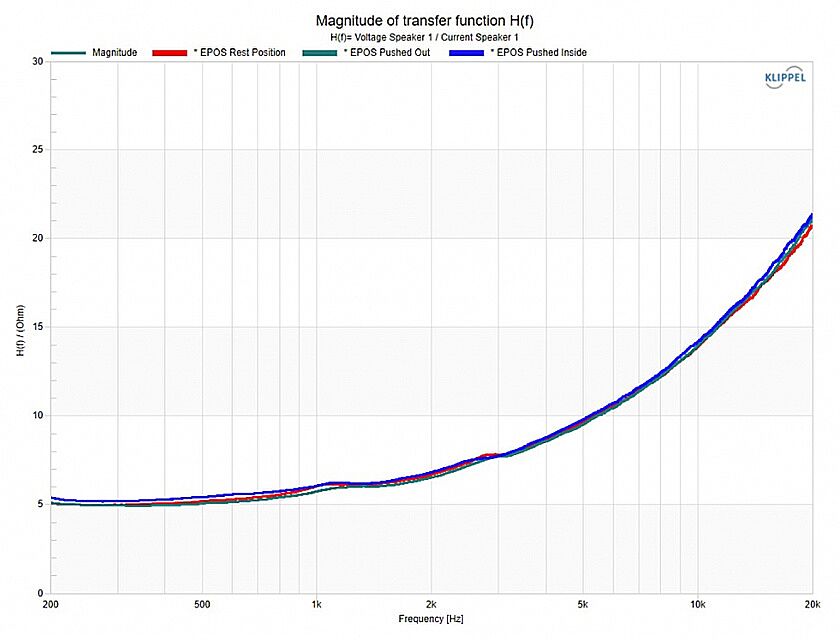 There is a small resistance between the woofer and the amplifier in tower to make the design less sensitive to different damping factors. Instead a larger magnet controls the alignment. The tweeter is using no Ferrofluid in the gap to suppress the resonance frequency of the tweeter. Ferrofluid sounds like a good idea, but it is a sort of oil that changes behavior when playing music. This is a very non linear process and modifies the sound depending on level and music style. Tweeters with no Ferrofluid are more open and natural and show less dynamic compression compared to standard tweeters with Ferrofluid. The other side of the coin: it needs a bit more crossover to be safe, but the total combination is a lot more linear. Even so the metal dome peak is shifted to around 30kHz, a new sort of filter has been added to notch it out without changing the level below 20kHz. The reason is that modern digital converters are shifting a lot of noise to higher frequencies. 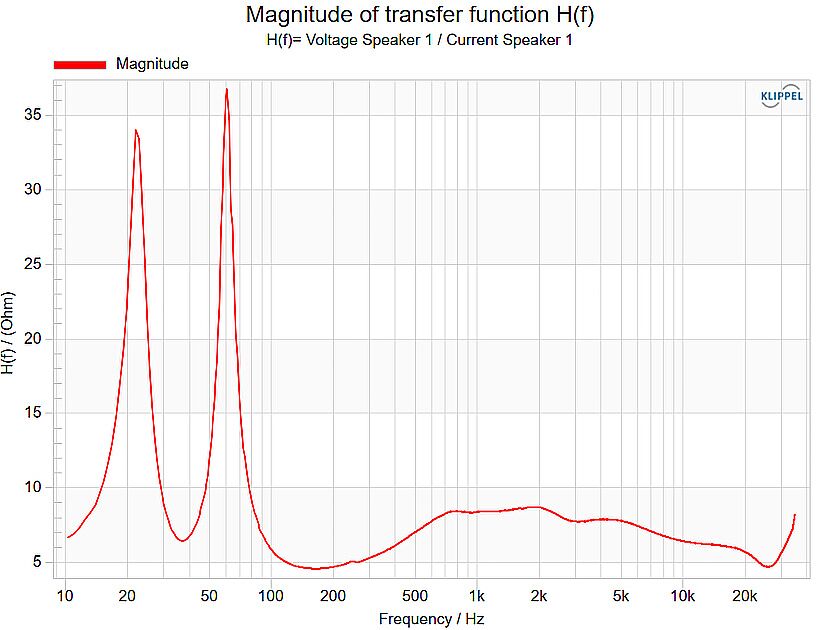 The speaker should be an easy load for amplifiers – that’s why the average impedance is higher than a usual 4 Ohm speaker. I also got a compensation in the midband to make it easier for tube amplifiers. 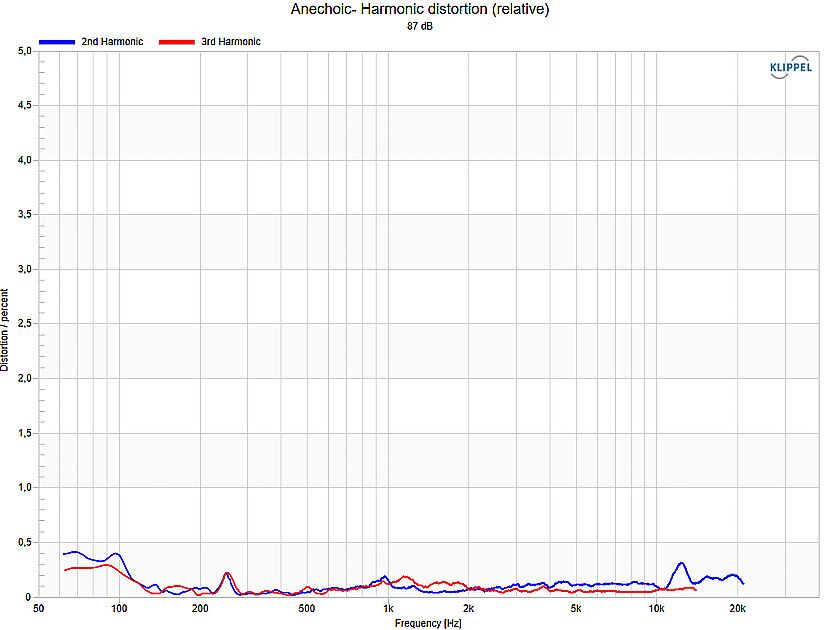 Modern speakers should be capable to deliver low distortion even at higher levels. Below the measurements @87dB and at [email protected] 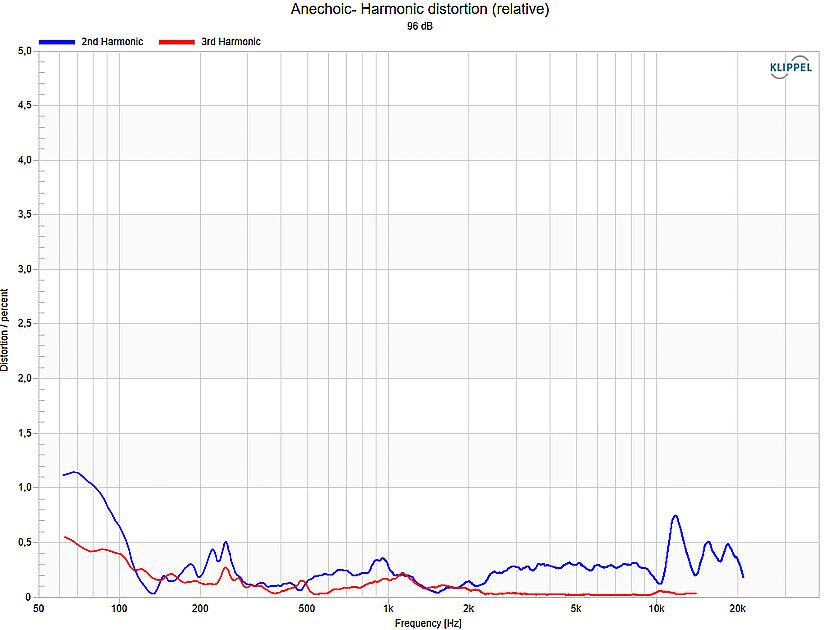 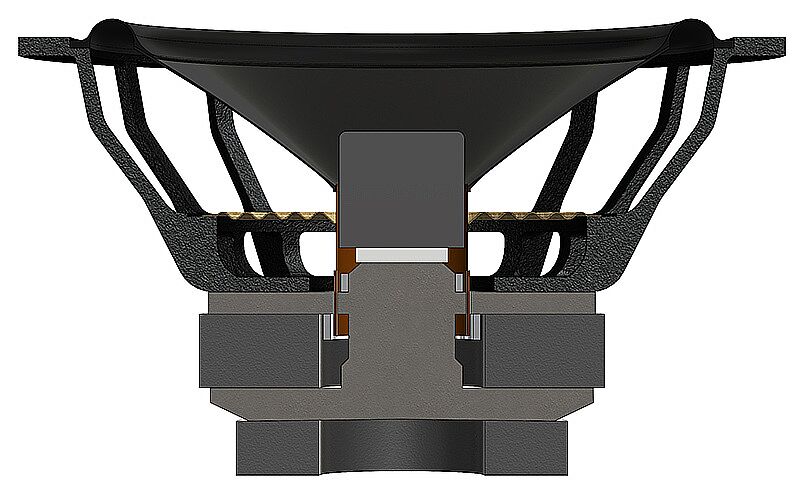 A 7“ driver designed for use in a ported speaker plus compensation for higher resistance air coil. Choice of Polypropylene as cone material was set from the beginning. Polypropylene is a nice material – very consistent, can be made with different filling material like MICA and it can even be injection moulded for funny shapes or variations in thickness. Combined with a low damping rubber surround, it delivers lots of dynamics with very low colouration.
The 36mm voice coil of the unit was a relatively straight forward choice. It uses a 18mm long 2-layer winding of copper wire on a non metallic TIL former (TIL is a Glasfiber/Epoxy mix ). 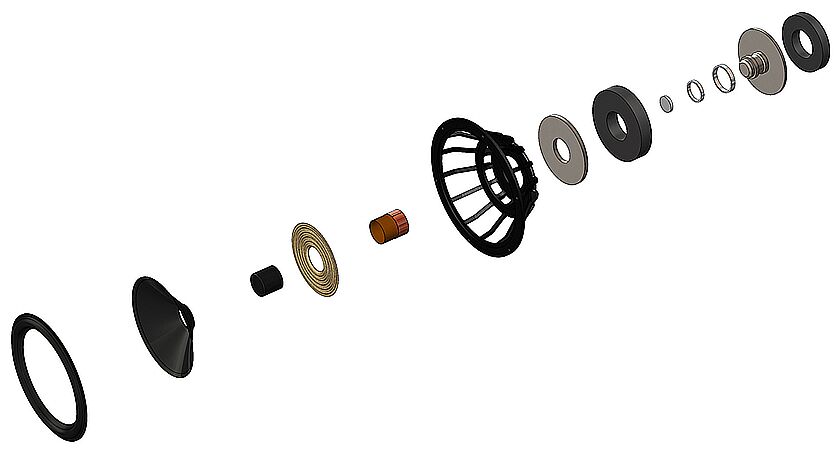 The shape of the magnet was optimized, using simulation, to have the best linear BL behavior and a very low variation in inductance over the movement of the coil. This gives you the lowest level of linear distortion and Intermodulation distortion and is clearly different to the magnet system used in the old days. variations. The main magnet is a Ferrite type, the flux compensation magnet reduces the stray field of the magnet and set the right BL for the cabinet size. A Neodymium disk on the pole piece made the BL more linear and a metal phase plug helps to move heat from the coil. All the parts are mounted into a very strong glass filled plastic basket made from scratch. The material was chosen for the combination of stiffness and good damping.

28mm VC for better performance at the lower end of the tweeter range. The dome itself is made out of an Aluminum alloy with additional ceramic coating to increase the stiffness. Together with the fabric surround and a shaped Mode control ring, the resonance peak of the tweeter is around 30kHz, shifting it out of the 20kHz limit of human hearing. The magnet system uses Ferrite magnets and an improved cavity combination to minimize distortion. Ferrite is the better material for a tweeter if a small size is not needed. It offers a lot more “air“ behind the dome and the surround and avoids compression and harmonic distortion because too small cavities.

A copper cap in the magnet reduces distortion and increases level at very high frequencies. The tweeter used no waveguide for sound reasons. To protect the dome, an oval asymmetric mounted perforated metal grill has been added. This part is not removable and was used during the voicing of the speaker. The massive metal plate of the tweeter is only touching the cabinet on 4 points around the screws (idea taken from Roy George of NAIM with his blessing) to reduce a transfer of energy between tweeter and cabinet baffle. The tweeter has its own cavity in the cabinet. 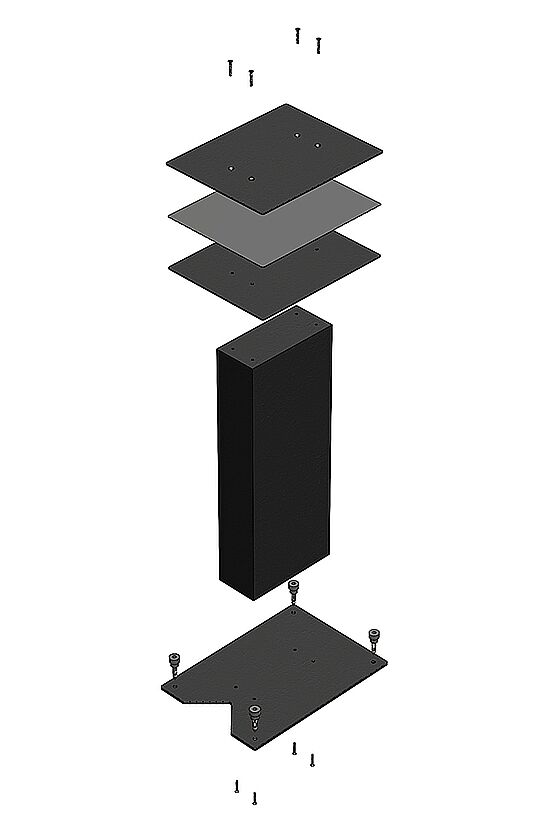 To give the speaker a home to sit on, a dedicated stand is available. The middle part is made as a massive wooden bar, combining 4 layers of wood, glued together with same damping glue used internally in the ES14N. The top plate is a double layer steel plate with a Bitumen layer in between and the bottom plate is a thick steel plate to hold adjustable spikes. The Speaker can be shipped without a stand, so other 55cm high stands can be used as well. 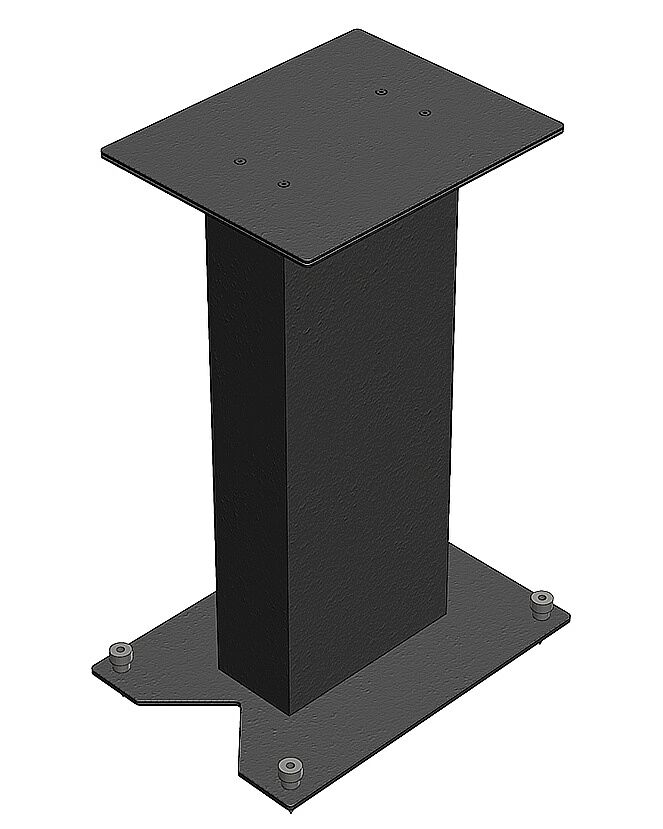