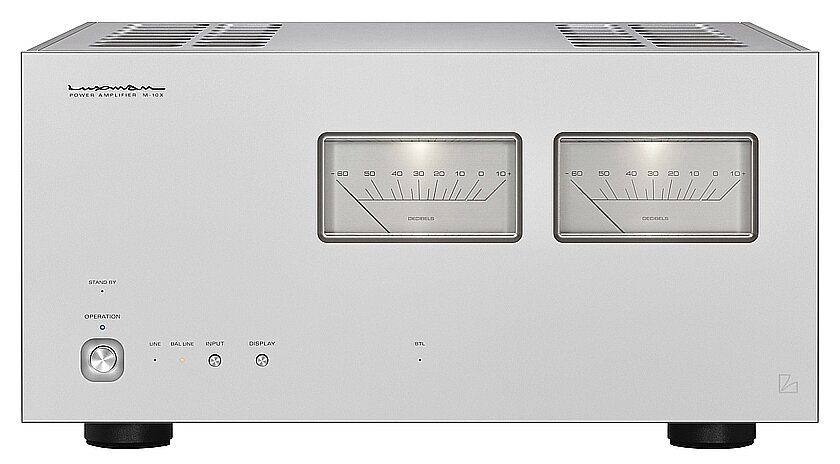 Shinyokohama, Japan | 2022 – Open your mind and experience the true depth of sound. An industry defining debut for our M-10X flagship amplifier.

Looking ahead to the 100th anniversary of our founding in 2025,we have returned to the fundamentals of music playback and have finally achieved a LUXMAN milestone, while still looking toward the future, we present our new generation flagship stereo power amplifier, the M-10X.
The most important innovation is the realization of our new amplification feedback engine “LIFES”, which has been developed and refined through the skillful attention of LUXMAN’s technical team. While based on our traditional ODNF technology, we implemented a fundamental review of the system and every detailfrom the layout down to individual components which all contribute to a rich musicality, full of vitality.

High performance drivability enhances playback through any speaker system.A beautiful chassis housing design, with blasted white finish, is proudly complimented with proper analog meters.This exquisite flagship model, the M-10X, can evoke what we mean by the true depth of sound, marking the beginning of a new era for LUXMAN. 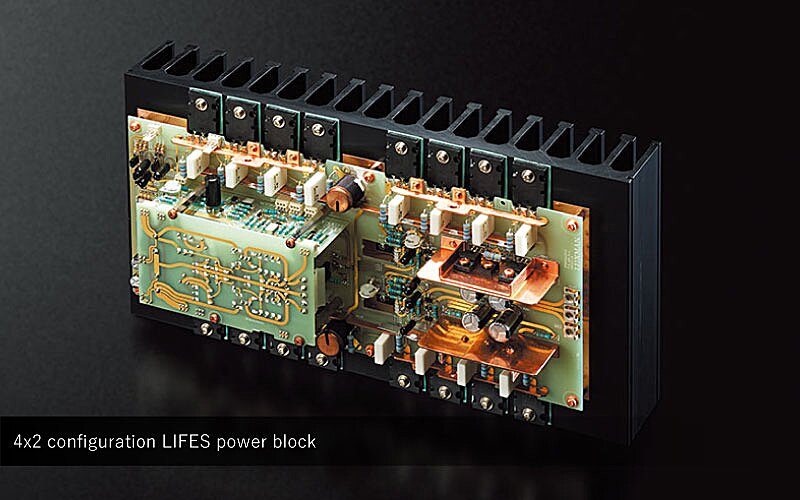 LUXMAN will celebrate our 100th anniversary in 2025 and we are proud to announce the successor to our ODNF* feedback circuitry, which has contributed to the audio quality of our amplifier products since 1999. We have developed a new amplifier feedback circuit, LIFES*, which has acquired realistic, fresh and rich musicality and overwhelming audio performance. LIFES is based on the technical concept of our renowned ODNF circuit and realizes excellent, dynamic characteristics without feeding back any of the original audio input signal to the main amplifier, achieving a remarkably natural sound quality, almost if it were a non-feedback equipped circuit. The design has been conceived and expanded upon from first principles using simulation technology and painstaking research. By repeatedly auditioning, rigorously scrutinizing and combining specially selected components, we have achieved supreme performance characteristics and a level of quality suitable for use in LUXMAN’s next-generation products. This is the birth of the epoch-making amplification feedback engine LIFES Version 1.0, which plays a key role in the amplifier products that will appear in the future, starting with the M-10X, and breathes new life into music. 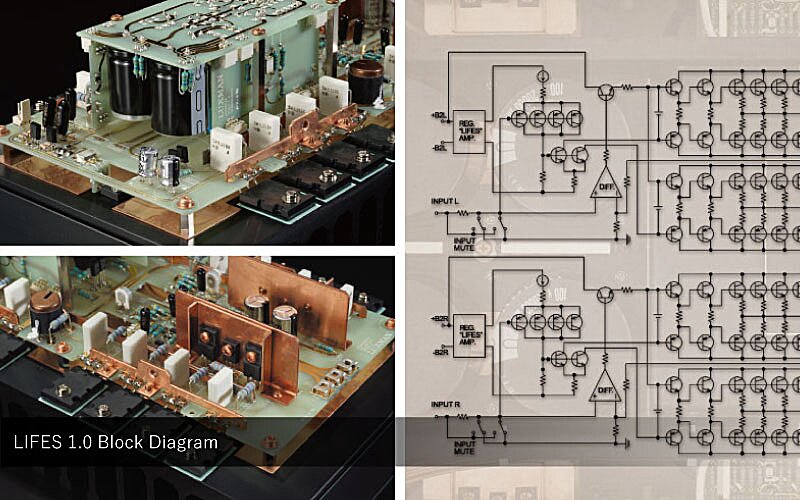 The role of the power amplifier is to faithfully amplify the music signal sent from the control amplifier to the output and drive your speakers accurately while fully drawing out the characteristics of those speakers. With “LIFES” installed in the M-10X and by reconstructing the entire circuit, we succeeded in reducing the number of parallel elements while improving performance and reducing distortion during amplification by half. In addition, the redesigned constant voltage circuitry constitutes a highly stable power supply that fully supports the AC and DC power demands. We have adopted a design that can maintain high performance with more stability. The current amplification stage has a 4×2 output configuration that combines two three-stage Darlington circuits and quadruple paralleled push-pull amplifier circuits that handle various load conditions, and instantaneously develops up to 1,200W+1,200W (1Ω) from a rated output of 150W+150W (8Ω). We have achieved complete power linearity up to 1,200W (1Ω). Along with pure class A operation up to 12W with careful bias current setting, it achieves both overwhelming power and sound quality with a sense of density at a high level. 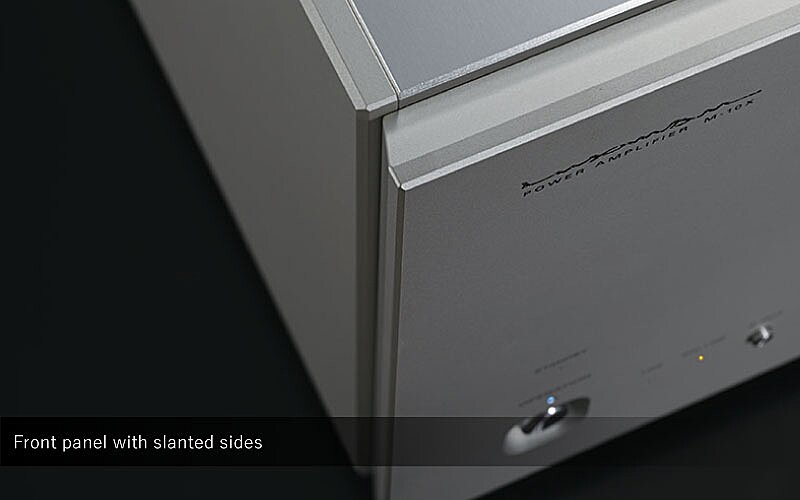 The M-10X has an authentic front face inherited from our M-900u model and expresses bold and delicate slanted edges between the chassis and the front panel.

Analog meters that express the dynamics of music 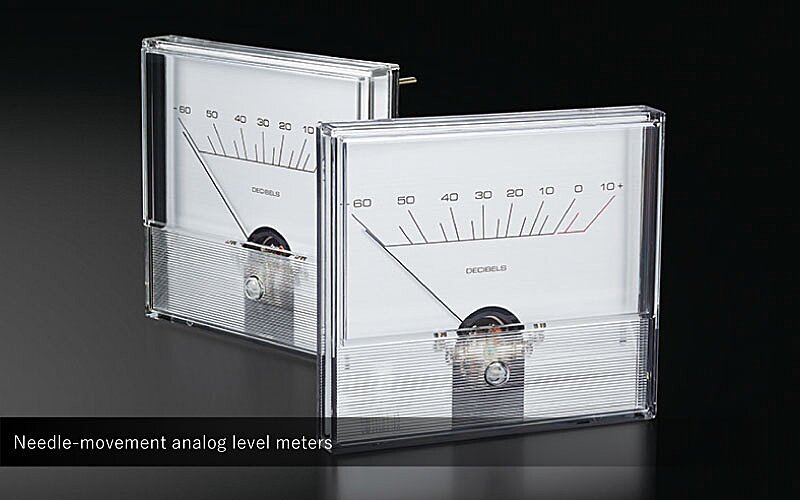 The front panel, which has a simple yet elegant design features prominent needle-movement analog level meters. The LED lighting effectively illuminates both meter scale plates, for improved visibility from listening positions. Meter positioning is optimized so that the operational left channel meter is exactly centered and given priority when used in BTL (monaural) listening mode. 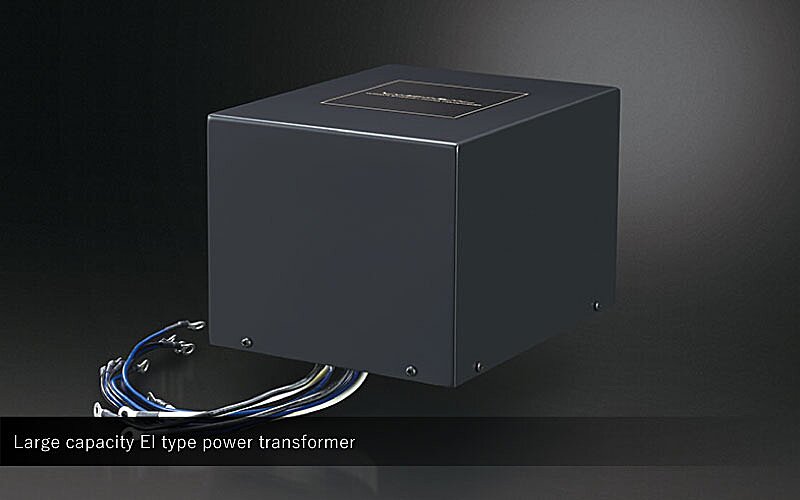 The power supply section supports the overwhelming power and drivability of the M-10X, with flat copper transformer winding wound tightly to conserve space, reducing line capacitance, improving the coupling force and stabilizing the magnetic field. The EI-type highly regulated power transformer has a large capacity of 1,250VA (instantaneous maximum 2,500VA), we have obtained tremendous regulation performance that does not waver with any load fluctuations. 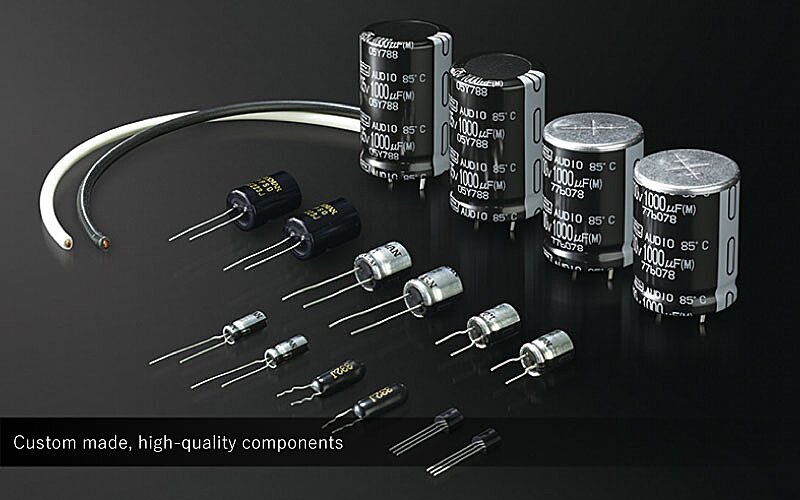 Every component in the circuitry is an important factor that affects the audio performance and musicality of this product. In the M-10X, we thoroughly listened, testing the audio performance of various capacitors and resistors, as well as wiring materials and terminals, and introduced a large number of original custom components that were carefully selected via advanced technology and sensibility. 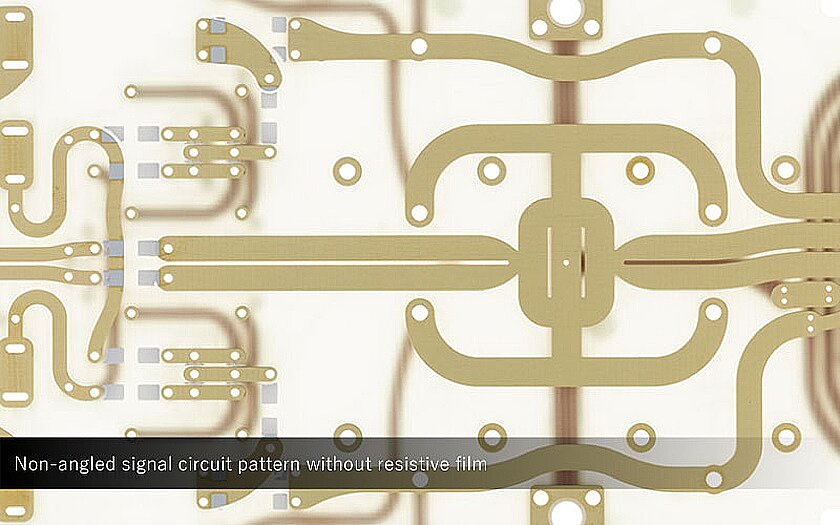 All audio circuit boards in the M-10X have 100μm thick, low resistance, gold plated, peel coat tracing that eliminates dielectric effects. In addition, we thoroughly implement a design policy that prioritizes sound quality in every respect, such as non-angled circuit board tracing that keeps the pattern width of the signal line constant and draws a smooth curve to realize smooth and stress-free signal transmission. 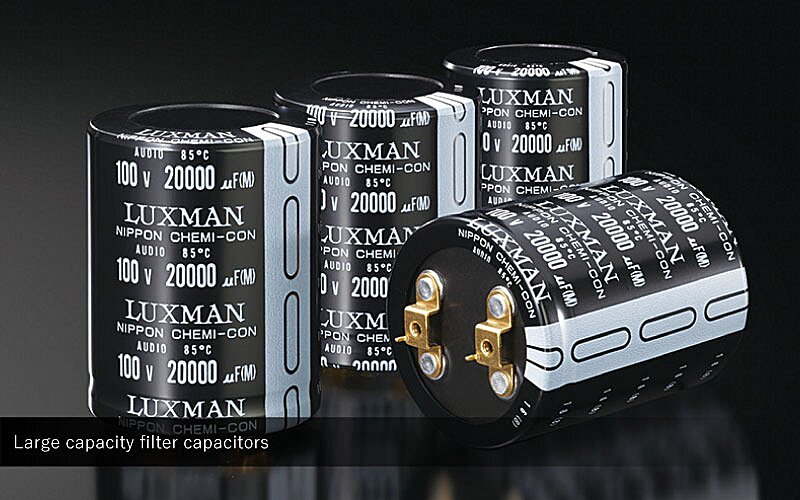 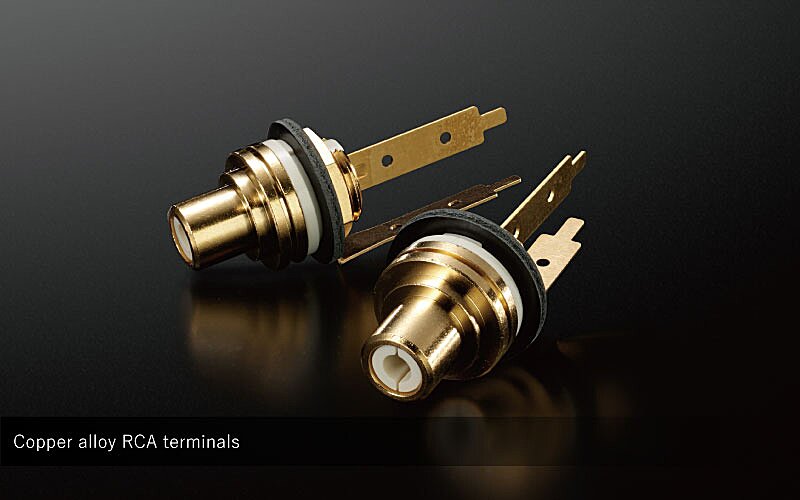 The inputs on the rear panel of the unit are equipped with high-performance RCA terminals made from a copper alloy which has the same conductivity as copper and the hardness of brass. The AC inlet’s structure has been improved to support the weight of heavy cables and, by reversing the mounting orientation from conventional mounting, it suppresses the movement of the power cable and maintains a stable grip. 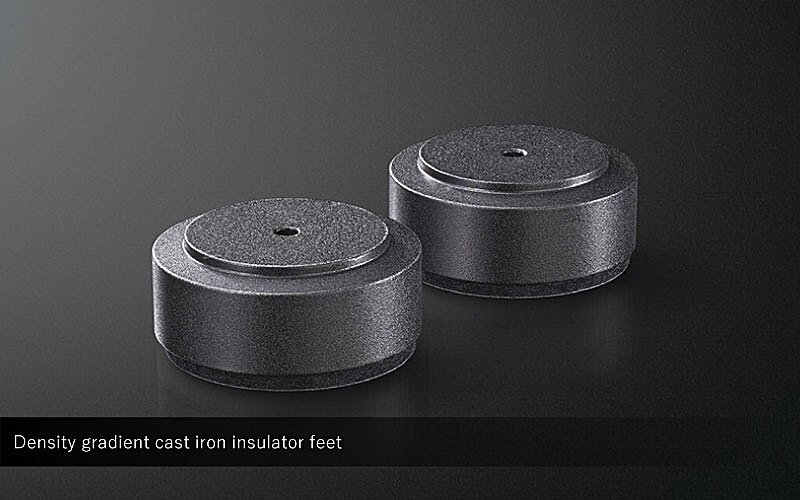 The base, which supports the main body, weighing over 48kg, is equipped with large density gradient cast iron feet that protect delicate music signals from unnecessary vibration by quickly releasing the vibration generated inside, while blocking external vibration. In addition, the metal housing uses a loop-less chassis structure that will not generate a ground loop and isolates the effects of generated magnetic fields and the rise in ground impedance due to chassis current. 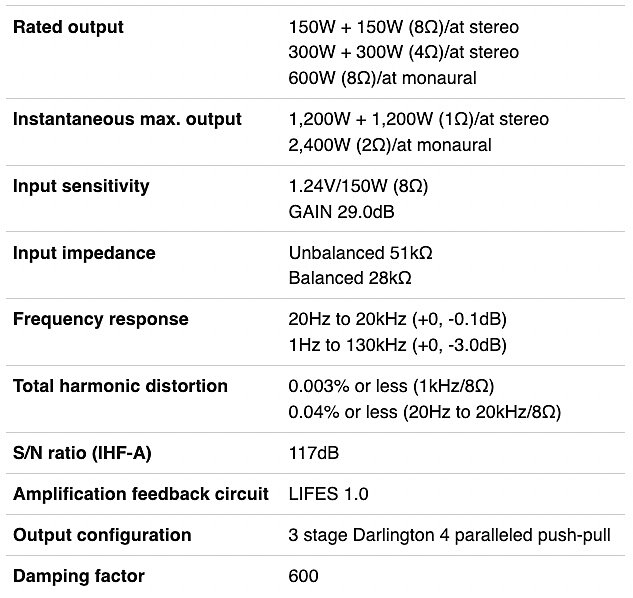 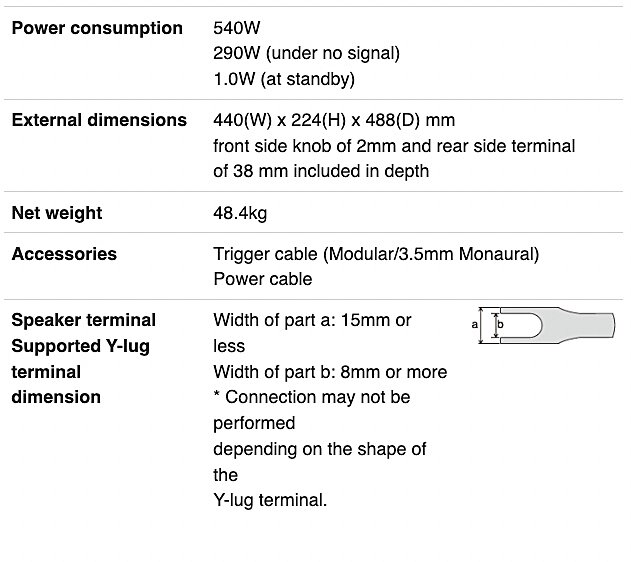