EQ-100, an Adaptive Multi-curve Phono Equalizer Amplifier, is compatible with any analog records capable of accommodating any record-cutting characteristics from SP (78rpm) to monaural LP (33 1/3rpm). The equalization value of Turnover in the low frequency range and Roll-off in the high frequency range are shown on the front panel, each having 10 selection. Accordingly, a total of 100 combinations are feasible independently without any mutual interferences. An easier setting is provided for a typical cutting characteristic such as 78rpm SP in US, in Europe 4 kinds (EU78 ~945, AM78 ~1945, EU78 1945~, AM78 1945~ ), for LP, RIAA , AES, DECCA, Columbia, NAB. Especially for DECCA, Columbia, and RIAA, a specifically designed Bass Limiter is provided for each record label to attenuate low frequencies for accurate playback.

This model was designed and developed with a concept of completely satisfying those enthusiasts from the SP experts to monaural mania to anyone interested in the pre-stereo records with user friendliness in mind.

Each adaptive value was determined with use of a circuit simulator and a computer in order to calculate the precise filter circuit. Actual circuit was meticulously tested and confirmed with Audio Precision’s measuring instrument. As a result, the best system was derived, i.e., to switch the values of resisters and capacitors with rotary switches. While playing a record, selection of EQ setting can be done with minimum noise. Some variable equalizer amplifiers use potentiometers to attain desired curves. However, precise setting with a potentiometer is not easy as it has large error tolerance. In addition, brush contacts sometimes deteriorate its reliability. This can be another factor causing difficulties for precision setting. EQ-100 completely resolved these problems. This model is designed to offer great enjoyment and value as it will excavate hidden sound, musical representation, and musicians’ original intent.

EQ-100 is designed with a monaural configuration; however, it has 2 inputs and 2 outputs for easier connection with a stereo system. Surely, it accepts a complete monaural system having a single speaker without any issues. The input is compatible with MC and MM type cartridges. What is more, the optimum load impedance and gain are configured for a modern MC type to achieve the best performance. For the MM input, in addition to a standard 47kΩ load impedance, an optimum load is featured for a Variable-Reluctance type. (VR-1) It is also compatible with the broadcasting type and initial Bachman type. (VR-2)

When a stereo cartridge is used, any vertical signal on a record is cancelled by an internal circuit of EQ-100. Only the R+L horizontal signal are detected to assure a superior sound stage with less noise.

The output is of a standard 2Vrms, hence there is no level difference between the modern system. If two units are used, it is possible to use them as a stereo phono equalizer with L/R independently.

A large-size MUTE Button, which is a well-established

Aurorasound’s unique feature, provides a more comfort when changing records and placing stylus on a record to start playing without fear of generating noise. Especially, some SP records have grooves widely swaying horizontally at the end of music to activate the mechanical “STOP” lever. This can cause annoying noise with today’s electric type playback system. With this MUTE button, this noise can be quickly muted.

It is also possible to compare between Variable/RIAA instantly with a switch on the front panel.

The exterior package of EQ-100 is designed with a wooden case so that it blends in harmoniously with any vintage equipment. For easier viewing and operation, built-in fold-away type tilting stands are equipped. 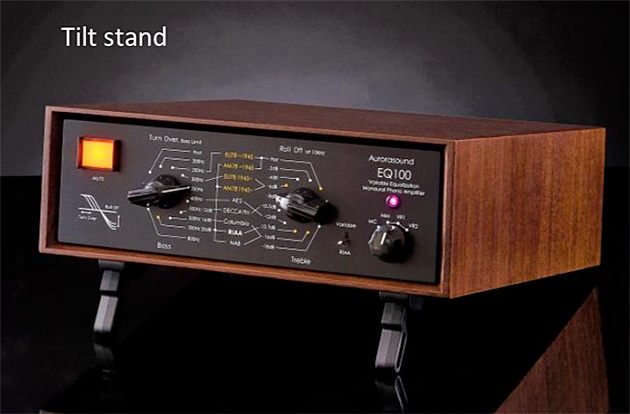 In the 1980s, when analog was at its peak years, very popular series transistors and FETs from NEC and Toshiba such as 2SCxxx, 2SAxxx, 2SKxxx were abundantly used with VIDA-MkII. EQ-100 is designed with adopting the same amp modules and the fist-class Op-amp known as Burr Brown OPA627, and Linear Technology LT1028.

These components are well-placed to accomplish both the best sound quality and electric characteristics. Capacitors are of German WIMA and Japanese polypropylene type, resistors are of TAKMAN, a toroidal transformer for the power supply, Schottky diodes known for its super low noise for the rectifier. These components are critically examined and generously employed. The shortest wiring distances are calculated amongst each module. In addition, grounding patterns of circuit board for the input/output, and separation of the power supply are designed in a prudent manner. The rotary switches, MUTE switch is of the most reliable Japanese manufacturers’ such as ALPS, OMRON, and NKK. 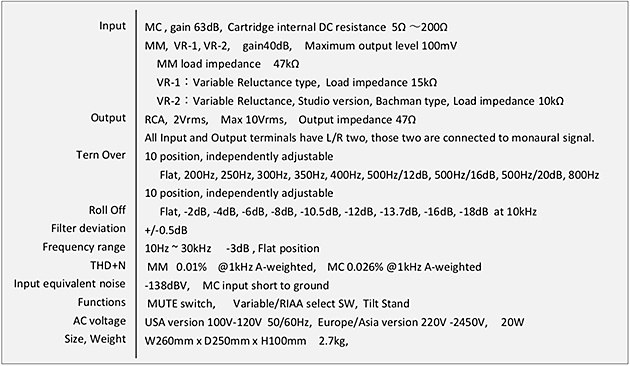 Each equalization filter performance of EQ-100 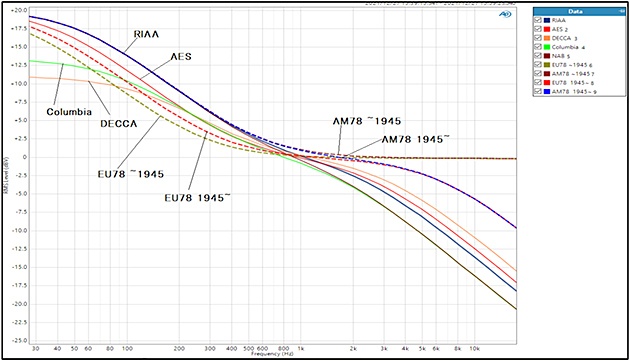 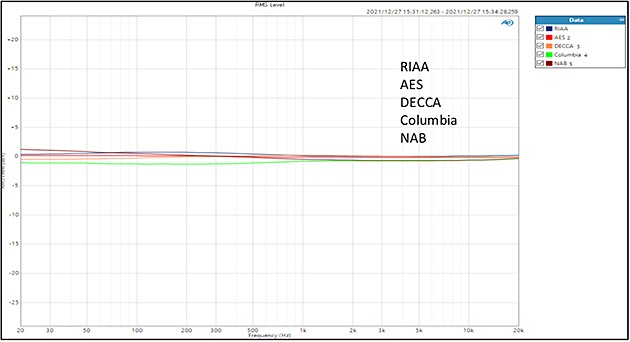