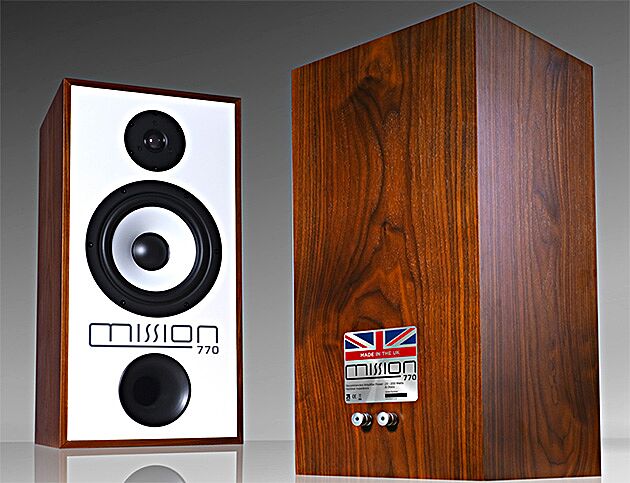 Huntingdon, UK | 2022 – The Mission 770 represents one of the most iconic models in the long history of Mission loudspeakers. A model that embodied the Mission pioneering research through the late 70s and 80s, with a bloodline dating back to 1977. The original Mission 770 debuted in 1978. It quickly became Mission’s best-selling speaker, and gravitated naturally into MK2 and MK3 alterations with improvements to sensitivity and power handling. After that, the design eventually migrated to Freedom and other variations, but none of them made the sales impact or notoriety that the original 770 received.

The project’s design and engineering team was led by Peter Comeau, Mission’s current Director of Acoustic Design. Peter was a young reviewer for Hi-Fi Answers when the original 770 launched and well remembers its impact (he subsequently co-founded loudspeaker maker Heybrook in 1979). For Peter, the new Mission 770 is a labour of love; just as it was for Farad Azima all those years ago. 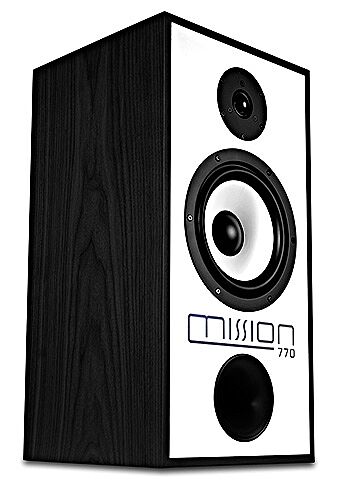 The new 770 heralds the return of UK-based manufacturing for the Mission brand, where a 25,000 square foot, purpose-built facility, in Huntingdon, Cambridgeshire – the home of British Hi-Fi.

The Mission 770 has always been manufactured according to the Mission principles of quality and value for money. New Mission 770 further exempliﬁes these two edicts; balancing ﬁne craftsmanship, natural sound quality, and affordability inside a beautifully proportioned loudspeaker that has been bought in its millions right across the globe through its various incarnations. 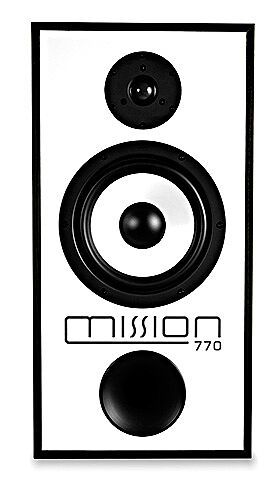 The original 770 was well known for its warm, rich and natural sounding character and the new Mission 770 retains that standing but imbues it with an open, detailed performance that will entice you to explore your whole music collection, once more. 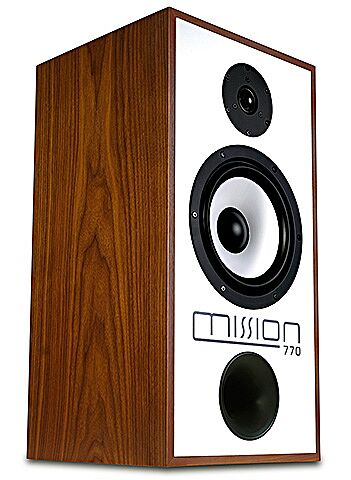 The emphasis for the design of the new Mission 770 is, indeed, that combination of polypropylene cone and resonance controlled cabinet. Accordingly, Mission has developed a new polypropylene driver, mimicking the extended response and low colouration of the original, while upgrading the motor system to take account of modern power handling and dynamic requirements. Naturally, like the original, the driver is built onto an 8-inch die-cast chassis with larger rear ‘windows’ to reduce early reﬂections back through the cone. Special care has been taken to marry a low-density nitrile surround to the cone to match its impedance and reduce reﬂections from the cone edge.

A new 20cm polypropylene mid/bass driver was developed for the re-engineered 770, mimicking the extended response and low coloration of the original, while upgrading the motor system to take account of modern power handling and dynamic requirements.
The new polypropylene cone has been treated to make it stiffer than the original, yielding a very tight and fast bass that enables you to hear exactly how bass instruments are being played. 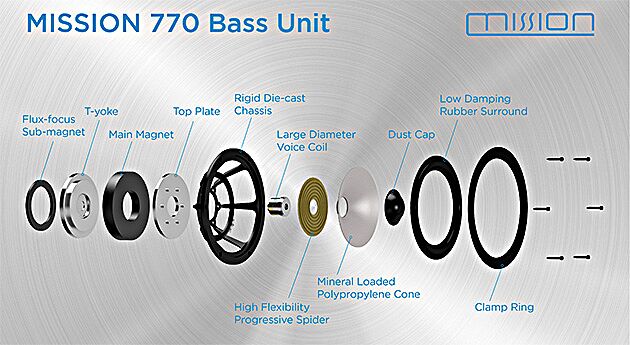 Like the original, the driver is built onto a die-cast chassis with large rear ‘windows’ to reduce early reflections back through the cone. Special care has been taken to marry a low-density nitrile surround to the cone, to match its impedance and reduce reflections from the cone edge.
The new polypropylene cone is loaded with minerals to make it stiffer than the original, yielding fast, tight bass that enables the listener to hear exactly how bass instruments are being played. This is balanced by tuning the cabinet and reflex port to a very low frequency, avoiding the ‘one note bass’ that is typical of a lot of bass reflex systems. In addition, the port is strongly flared at both inlet and outlet to smooth airflow and eradicate distortion. Bass extends powerfully and cleanly to below 30Hz in room, which is remarkable for this size of speaker. The Woven textile soft dome treble unit – true to form, with a high ﬂux ferrite magnet, is engineered for smooth, detailed HF extension. This new treble unit uses a lightweight, damped microfibre dome with an ultra-smooth response, backed by a damped rear chamber that pushes the fundamental resonance well below the crossover region. The quality of this 28mm dome marries perfectly with the mid/bass driver to ensure evenness of character throughout the range of the whole speaker.

The highly researched crossover – 1000s of hours of listening tests perfect the coherent, seamless musical output that is both thrilling and natural in its rendition of any source material.
IAG’s Director of Acoustic Design, Peter Comeau, has worked tirelessly to ensure a seamless integration between the drive units, so the speaker behaves as one music-making system. 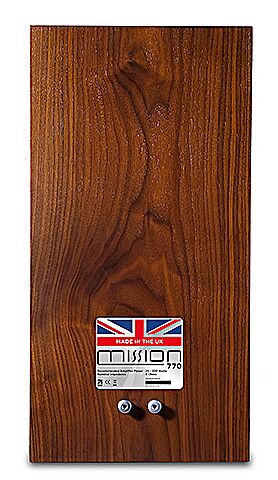 Today’s advanced software crossover mapping and measuring techniques allow Mission to perfect the balance between bass and midrange and adjust the crossover to the treble unit by mapping the acoustic crossover slopes with extreme accuracy. Even so, the choice of EQ and crossover for the new 770 involved hundreds of hours of listening sessions using a wide variety of music, and over 170 circuit iterations were tried before the final crossover was settled upon.
The circuit was then mapped out onto separate bass and treble PCBs using very short signa paths and accommodating high-quality components such as super-transparent polypropylene capacitors and air core inductors, maintaining the simplicity and elegance of the original whilst improving critical elements. The resulting transparency to musical detail ensures the thrilling emotion of music is fully conveyed, whilst maintaining a seamless transition between the mid/bass and treble units. 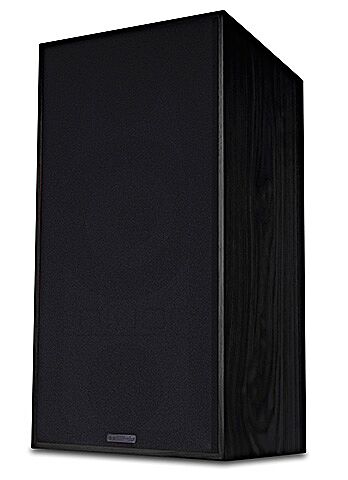 The drivers and crossover are housed in a real-wood veneered cabinet with a white laminated front baffle echoing the style that made the Mission 770 a stand-out hi-fi product in the 1970s and ’80s. Beneath the rich, rosy-tinged walnut or black veneers lies a further technological advancement. While the original 770 reduced midrange coloration using the BBC-influenced technique of a thin-wall cabinet damped by mass loading with bitumen pads, the new 770 features a twin-wall sandwich of high-density MDF and particle board bonded by a layer of Left All-new treble unit with 28mm microfibre dome delivers smooth and extended high-frequency performance5 high-damping adhesive. This results in a cabinet with panel resonance well below audibility, allowing the drive units to do their job unsullied by cabinet coloration at all frequencies.
Internal bracing adds strength to the front baffle and braces the drive unit to the cabinet, creating a mechanical support that aids the dynamic performance of the bass unit and reveals the microdynamics of the musical performance. This is complemented by a layer of acoustic foam and damping fibre, strategically placed to absorb reflections inside the cabinet without overdamping the bass quality.

The new Mission 770 is not only designed and engineered in the UK; it is made here too. Mission’s parent company, IAG, has expanded its facilities in Huntingdon, Cambridgeshire – the traditional home of Mission – to incorporate key manufacturing, assembly and finishing processes for specially selected products, in addition to the R&D function already located here. A 9,000ft2 production facility has been added to the existing building in Huntingdon, including a new anechoic chamber, making a total of 25,000ft2 of office, lab and manufacturing space.

A Stand Up Design 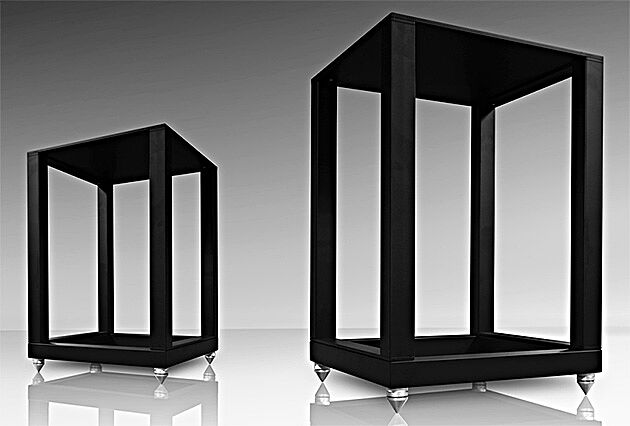 The Mission 770 stand is custom designed in conjunction with Mission’s Director of Acoustic Design, Peter Comeau. Every aspect is considered to create the perfect presentation of the 770 speaker. Hand made in the England, with robust British steel, the 770 stand reinforces the no-compromise approach in the ‘Made in UK’ theme for the return of the Mission 770. 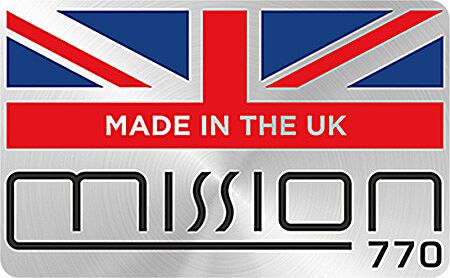