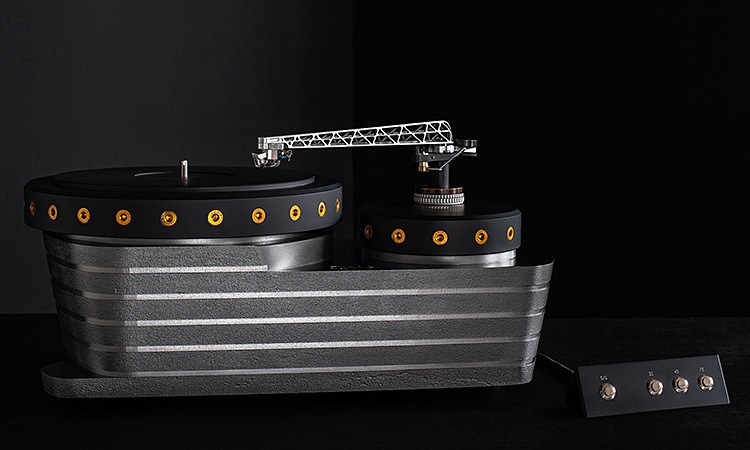 Fleetwood, Pennsylvania, USA |  2021 – K3 has been a seven year project to create and redefine state of the art for vinyl playback. We wanted to set a new mark for the turntable, forming an international collaboration with the world’s top experts in direct drive turntable design, motor control, and tonearm technology. Bucknell University’s Engineering and Physics departments did extensive FEA and other analysis of the platter and chassis design (and gave OMA their award for most innovative product of 2019.) K1, K2 and now K3 were built over this seven year period, iteratively developing the final design through an unusually long period of R & D, allowing the creation of a turntable which literally is without precedent. K3 is truly a “from the ground up” brand new design in every aspect.
K3 is an exercise in the design ethos “form follows function” with no extraneous elements, employing a cast iron chassis using a minimum number of parts, composed of hypo eutectic gray iron with high graphite content, itself internally molded with hollow chambers filled with a special liquid and particulate matter designed to dampen and absorb vibrations. A similar strategy is employed with the oversized platter and the main armboard. The unique external appearance of the chassis, showing the casting process, is in contrast to all other turntables which are merely machined out of a solid block of material. The finished, machined and polished cast iron chassis along with the platter and armboard is coated with a ceramic finish developed for use on firearms and high performance vehicle components.

K3 features a motor more powerful than anything ever used on a turntable, and far more precise. We built our motor using components otherwise found on the US military’s anti ballistic missile defense systems, nano manufacturing and photo lithography machines and deep space telescopes. We hope to offer a stand alone version of our motor in the future to replace Neumann cutting lathe motors (Lyrec, Panasonic SP-02) for record cutting engineers. This motor, comprising a huge 25mm main bearing spindle riding in a pressurized oil column with an inverted bearing is accurate to molecular tolerances. The design of K3’s mechanicals is the work of a team led by Richard Krebs in New Zealand, the worlds’ foremost authority on direct drive turntable technology, and involved over 1100 hours just to program the motor control system down to arc second speed accuracy. Emphasis was placed on dynamic speed stability, as opposed to the average speed approach of all other turntable manufacturers. The result is an other worldly presentation of dynamics and micro details in the record groove, an experience of vinyl that has been described as “revelatory”.

The K3 tonearm is the creation of world renowned tonearm designer/maker Frank Schroder of Berlin. Frank created the K3 arm to be consistent with the project’s innovative and technically revolutionary spirit as much as with its bold appearance. The arm is the first to be made using the 3D metal printing process known as SLM (Selective Laser Melting), whereby an aerospace aluminum alloy powder is fused by a laser into a form impossible to fabricate any other way. The ratio of bending/torsional stiffness to weight is extremely high, the tonearm’s low mass counterweight is decoupled by its own thread suspension/bearing assembly system which effectively decouples it from the main arm wand and prevents any energy storage in the counterweight section, an often overlooked detriment to sonic purity . The integrated Azimuth- and VTF-finetuning contributes to the ease of set up and use, same for the neutral balance mass distribution of the arm, which accounts for near zero change in tracking force for any change in VTA or record thickness. The Schroder K3 arm is only available as part of the K3 turntable package.

K3 is available as a stand alone turntable with an outboard Xenon tube rectified power supply, or with its own stand . The K3 stand was designed specifically for the turntable, and houses all the power supply components inside, so no outboard unit is visible. We also offer the K3 system with our new PD2 phonostage, located within the stand as well. Industrial design in collaboration with Ana Gugic of Rome.